Preservation Report
Join us   Home Sales items Latest News  Links  contact us
How 5759 and 68002 were prepared for Slade Green Depot Open Day.
Our preservation team worked hard to make our units look their best for the Slade Green open day on Saturday 15th July 2017. We treated 5759 to a complete repaint, including the roof. 68002 was given a brand new traction and control battery. Both units passed the required UAT (Ultrasonic Axle Test) and FTR (Fitness To Run). The pictures show a typical days' work by our presevation team. Why not join the EPBPG and support the restoration of our vintage EMU fleet? 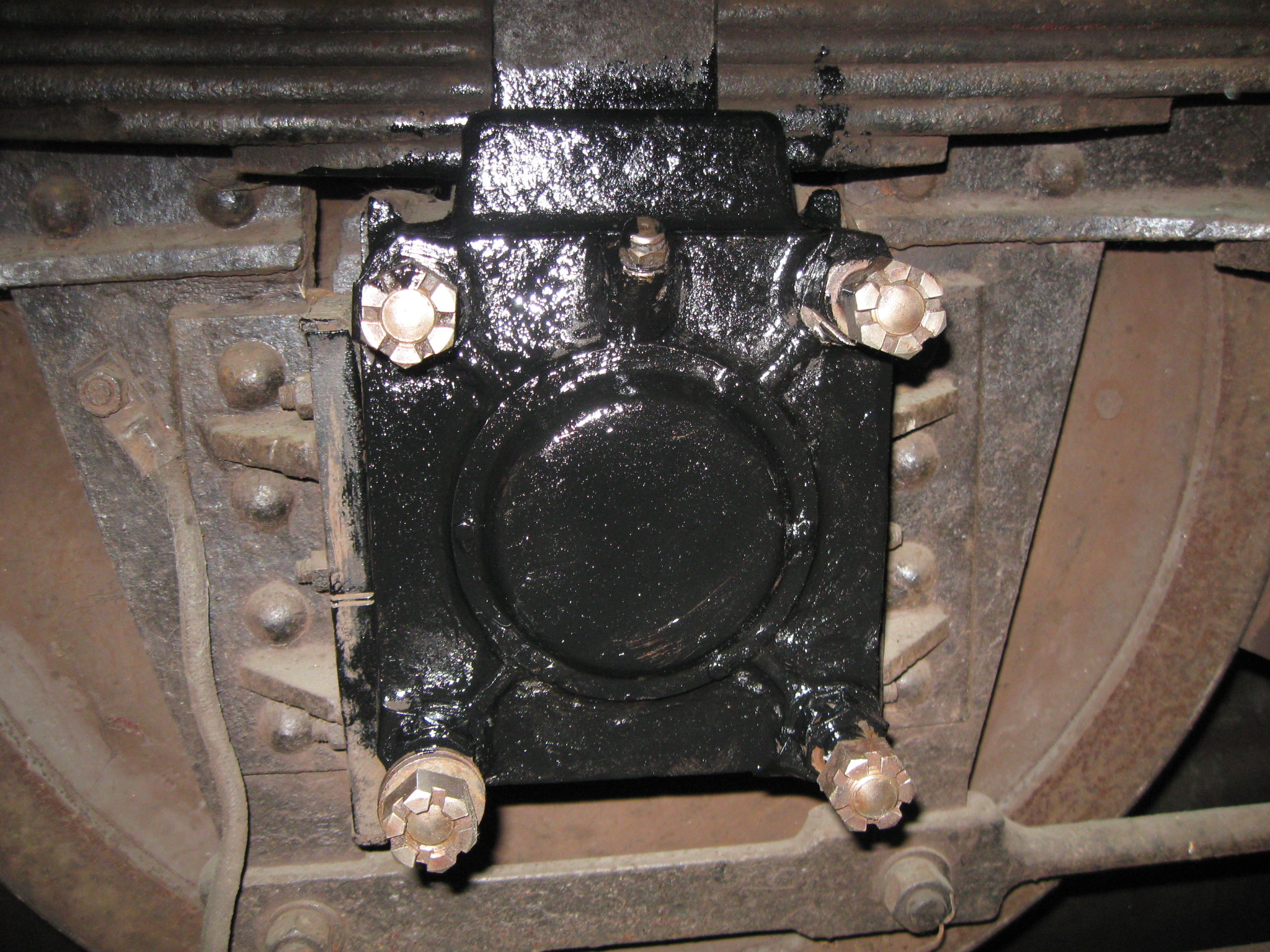 When the shoebeams are put back on these repainted surfaces will be hidden! 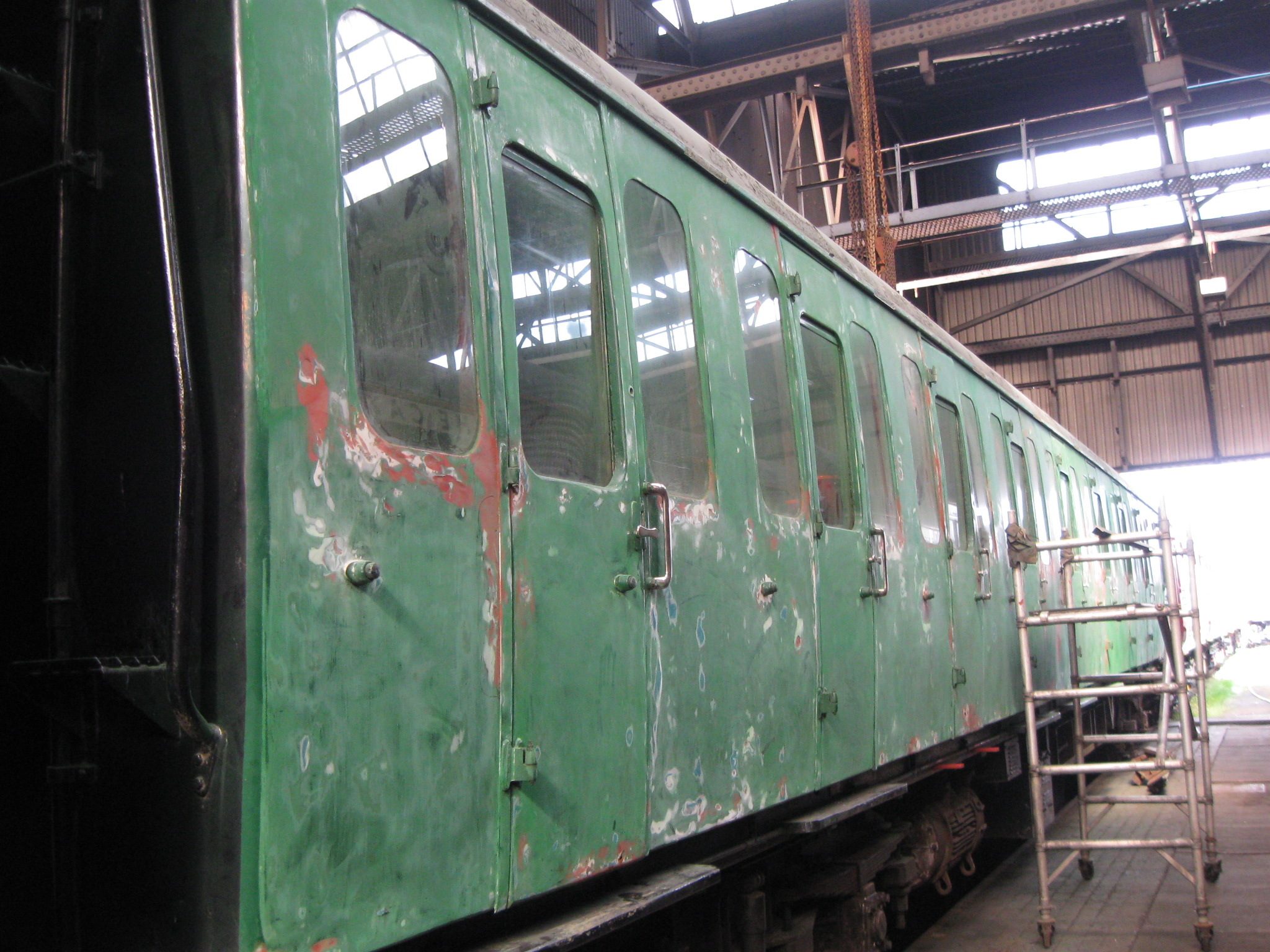 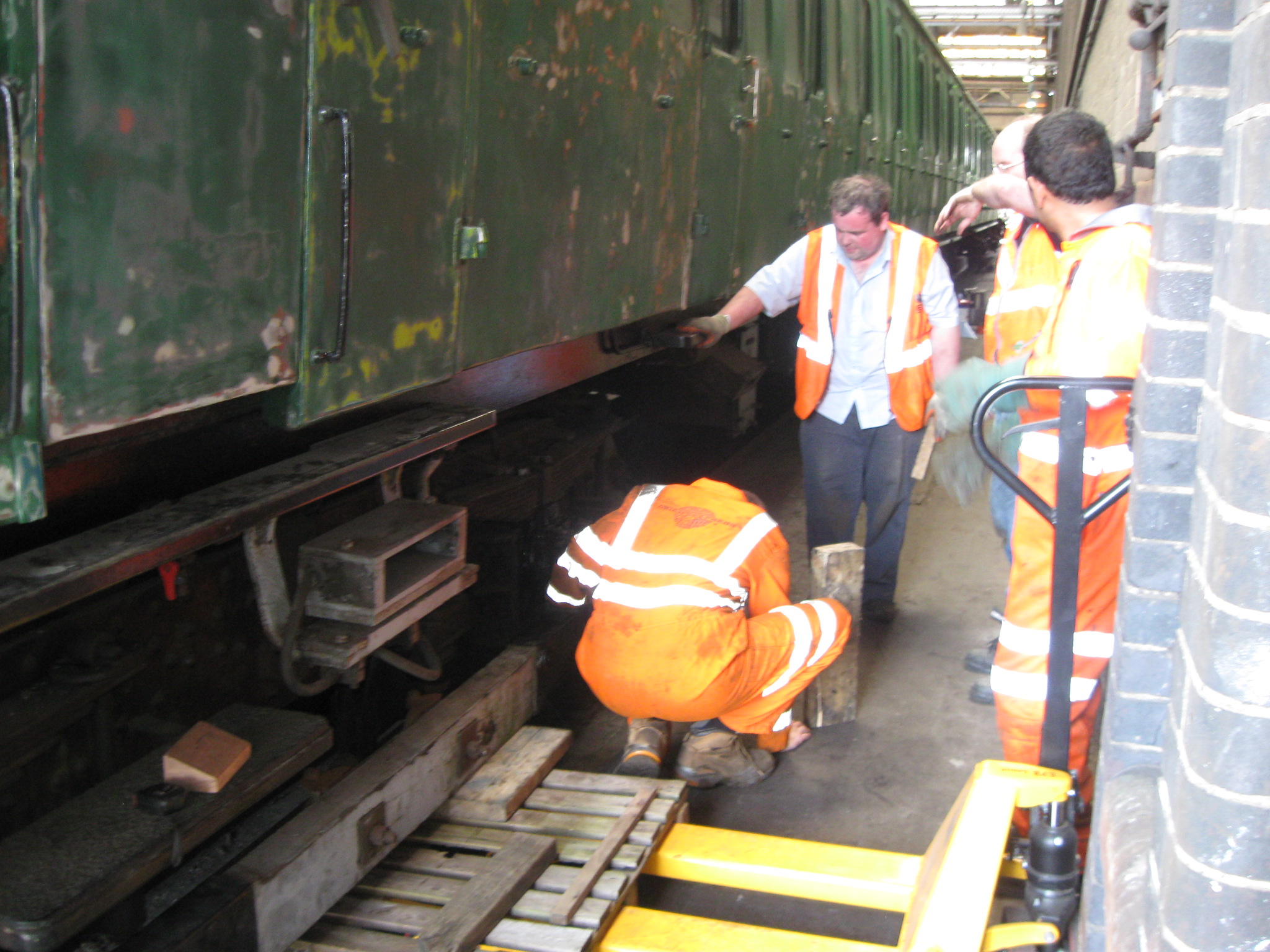 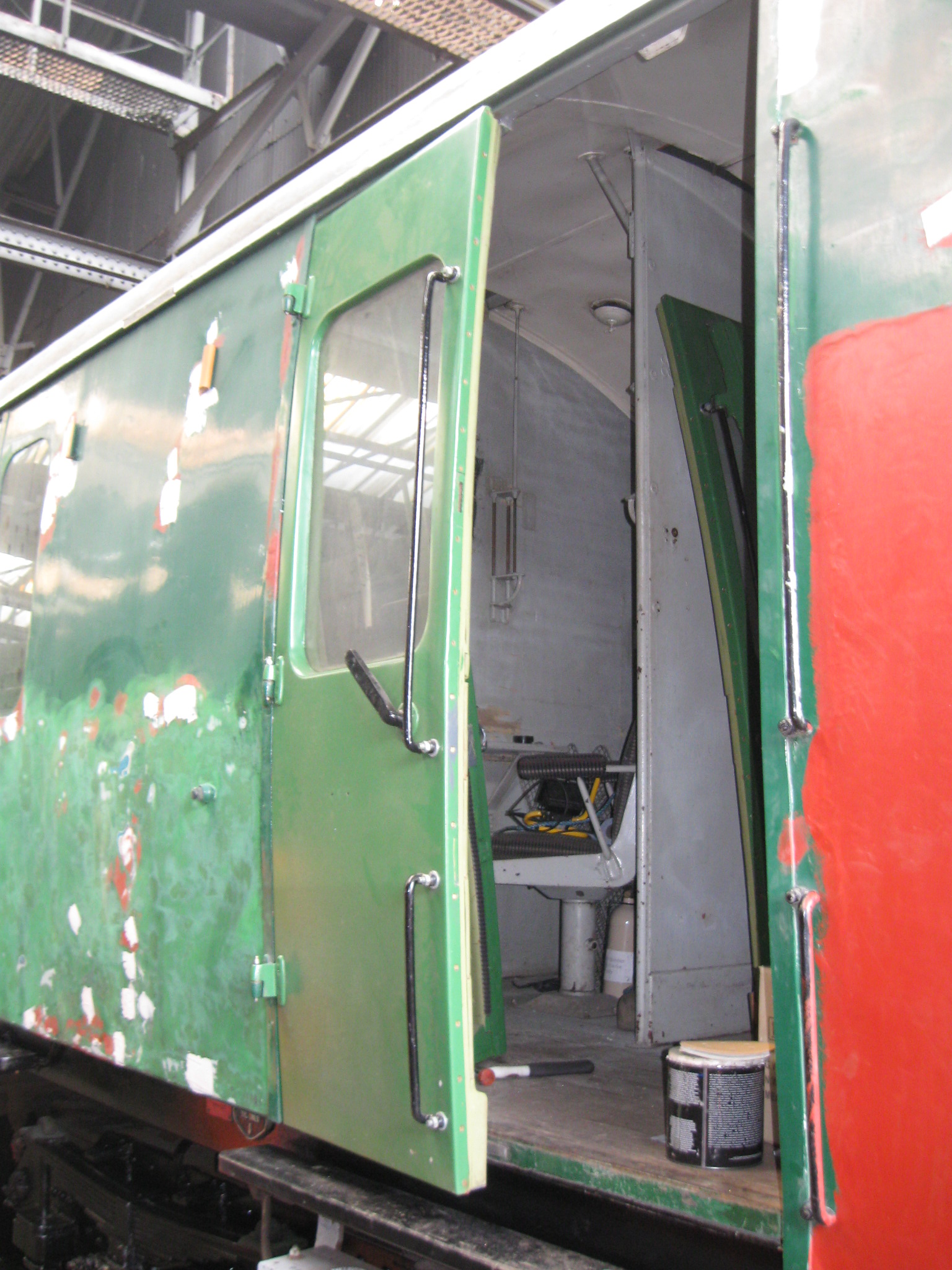 A great start to 2017
The Cep trailer at Ongar has lost all traces of the previous
SWT livery. Despite the cold weather on 11th February the final coat of undercoat green was applied successfully. (right)
October 2016-Cep Trailer turns Green
Good weather has led to rapid progress with the repaint of the Cep trailer composite coach, as the latest pictures show. (below)

The repaint of the Cep composite brake coach continues. The bottom strip has been refixed, this is a modification to many coaches to prevent corrosion of the lower bodyside. The alloy strip is held in place with rivets, each needed drilling out and replacing. The dry weather has allowed further bodyside painting in undercoat. 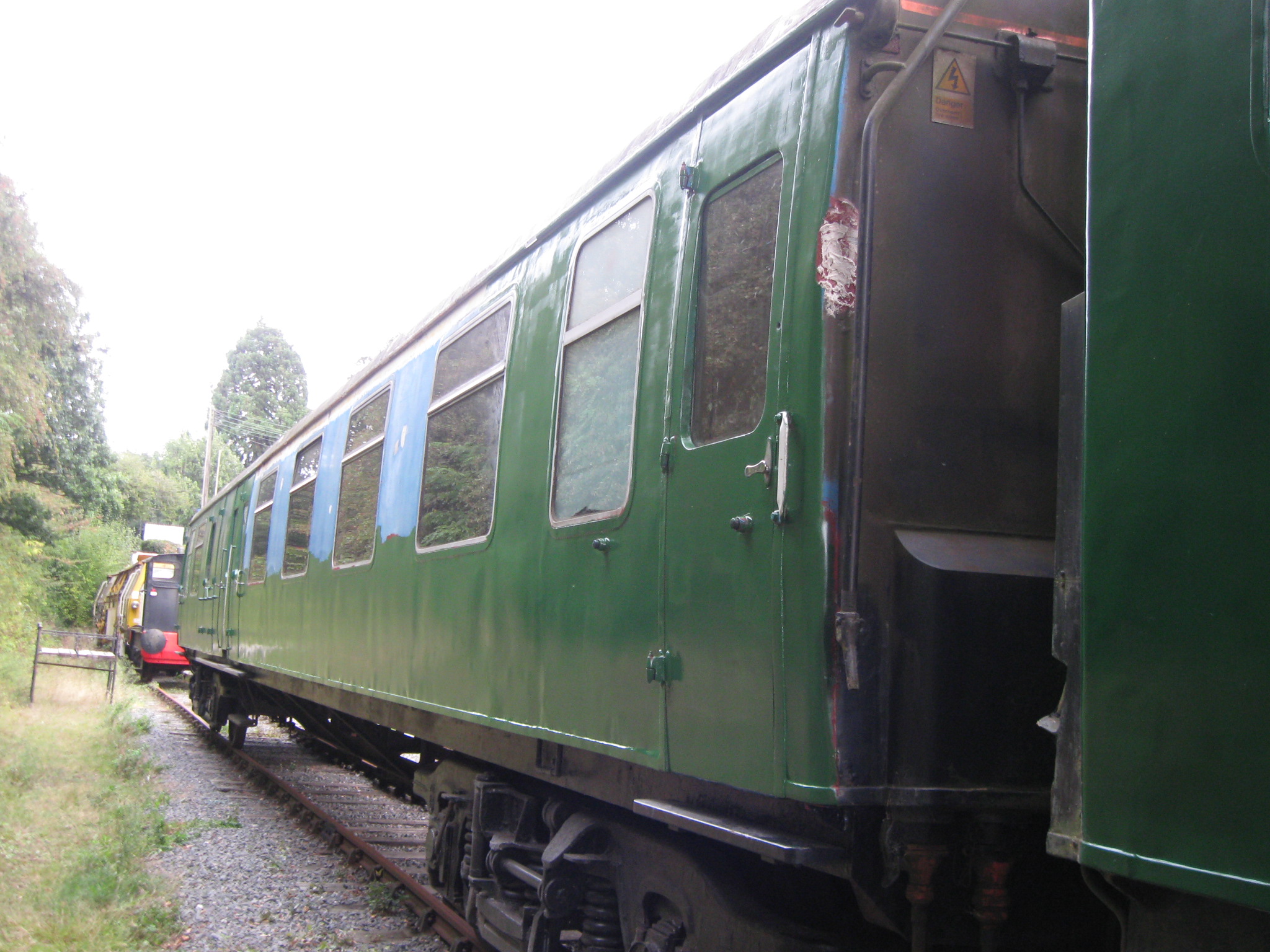 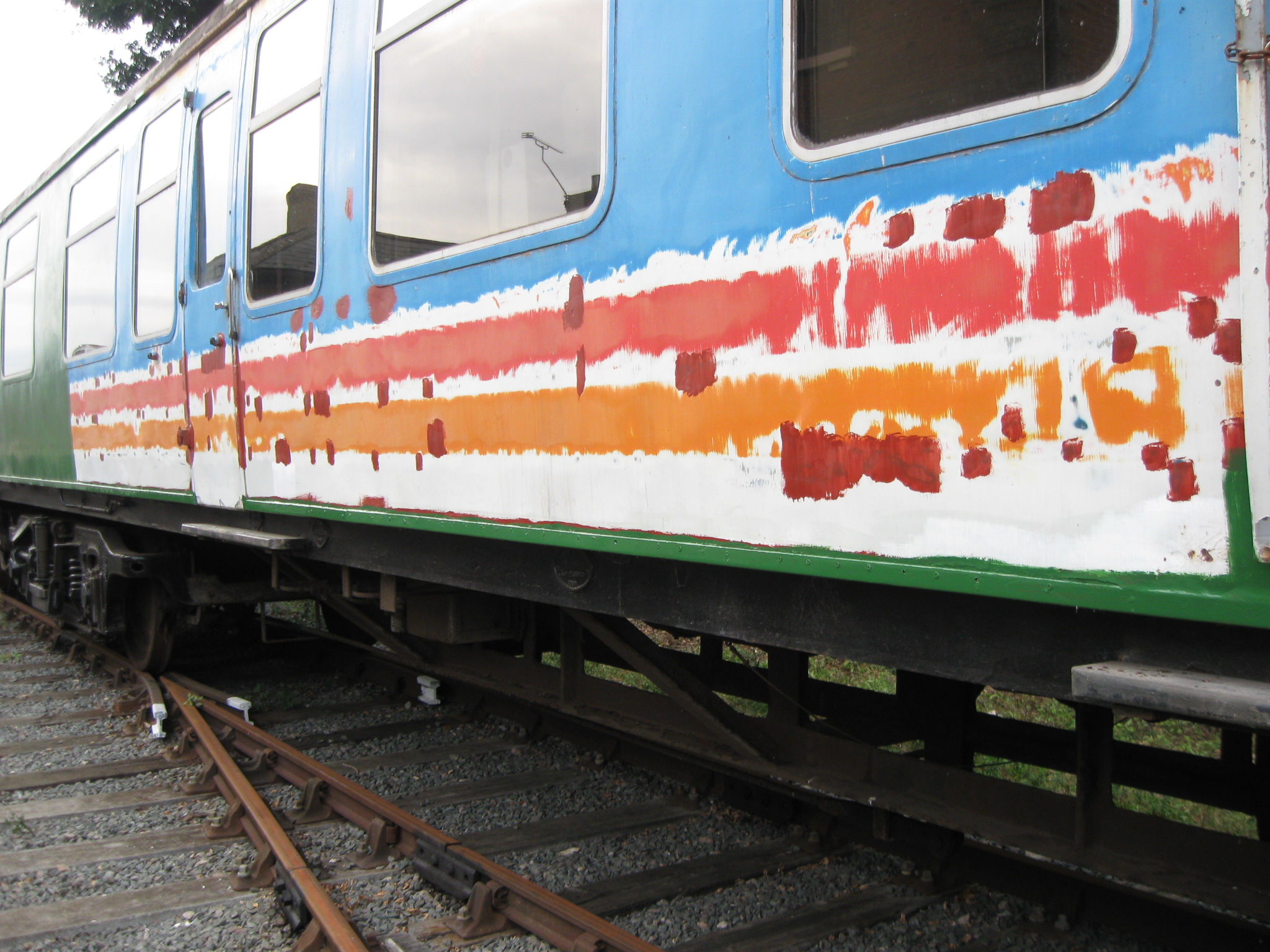 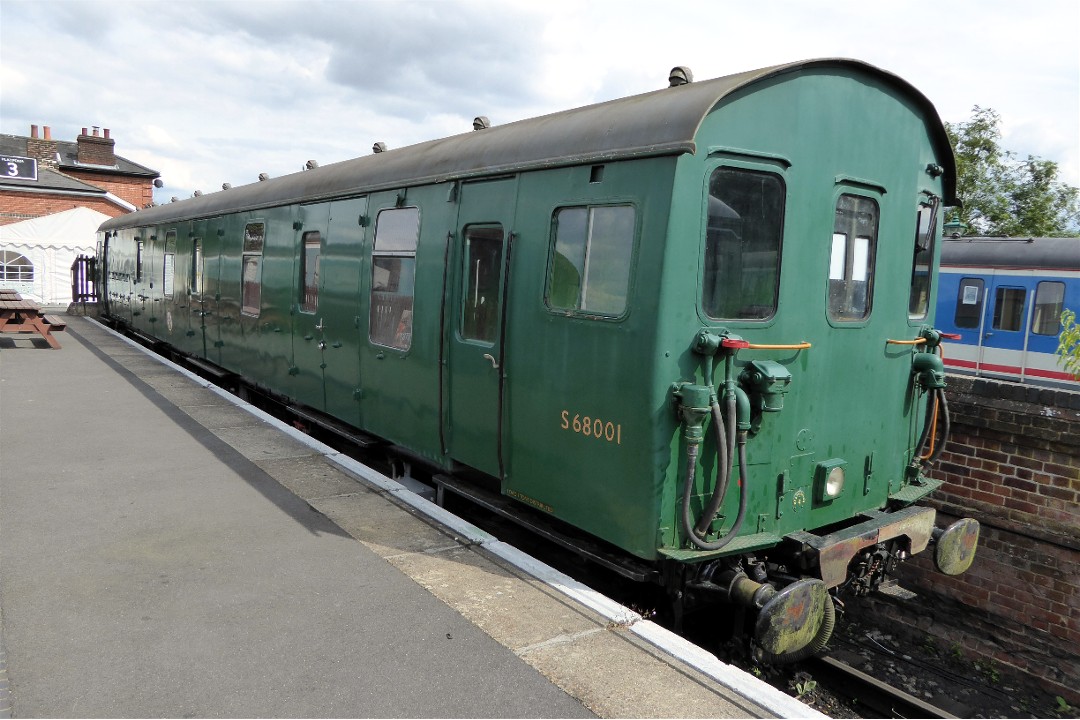 All our units have now left the East Kent Railway for new homes.

July 2016--The trailer coaches have been repainted as much as possible considering the weather and time available to do so. It is a tribute to the hard work and dedication of the preservation team that work has progressed this far. 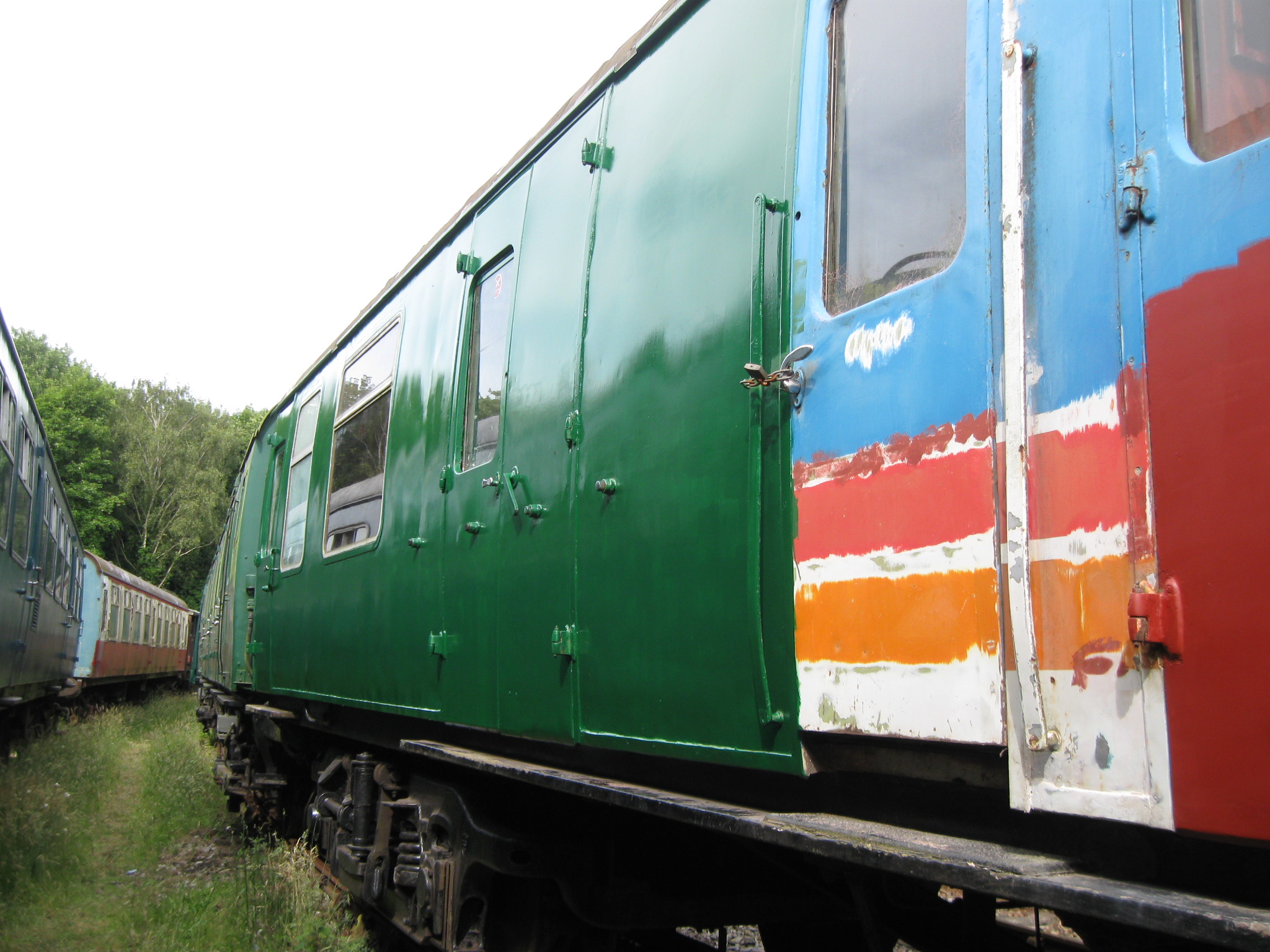 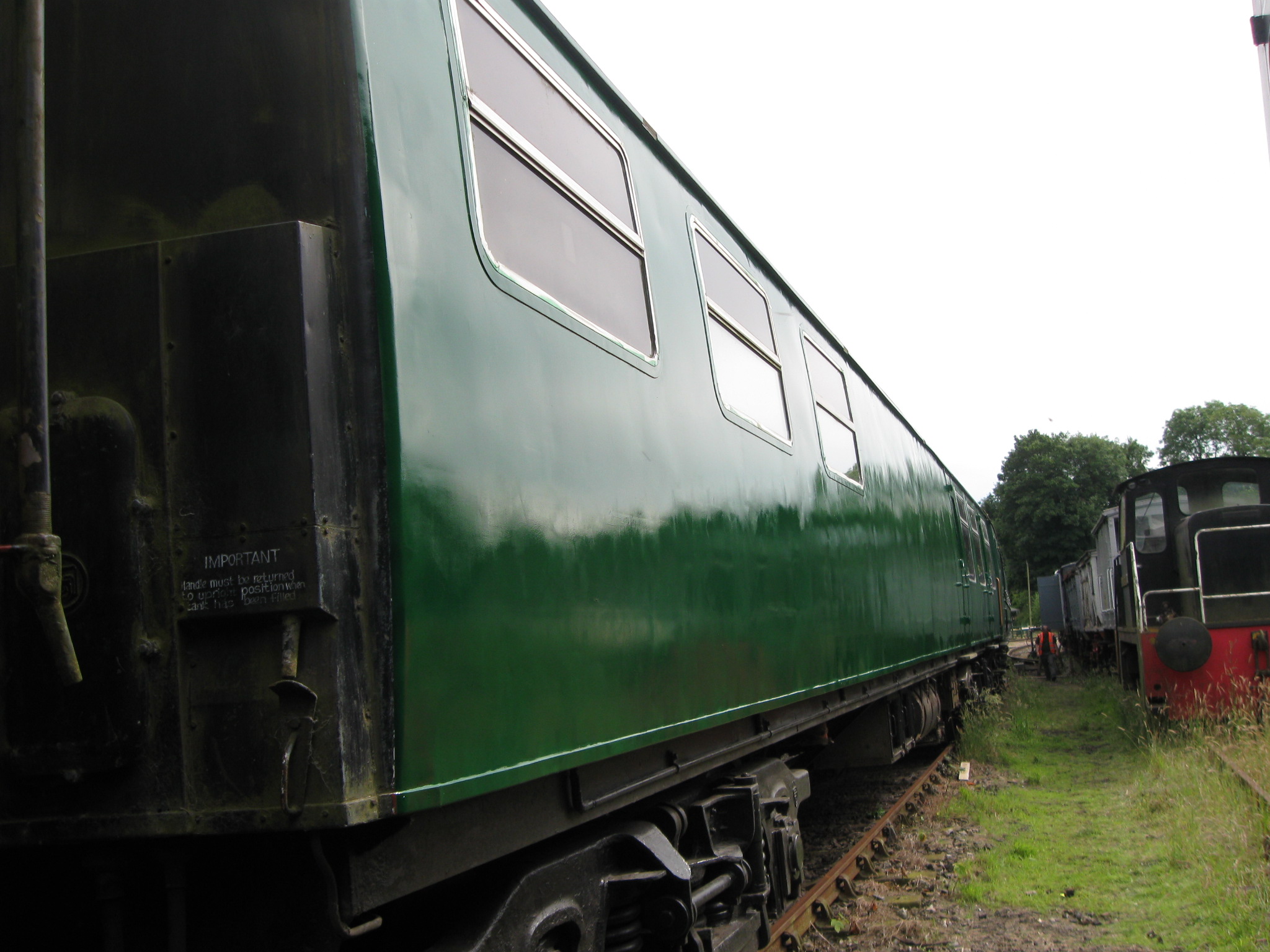 Though the Cep trailer composite and Bep buffet car are having to leave the EKR the preservation team have been busy repainting these coaches into green, in preparation for whatever new location the coaches may move to. The paint will also help protect the bodywork. Some re-glazing is also planned. Volunteers to help are always welcome, contact chairman@epbpg.co.uk to volunteer. 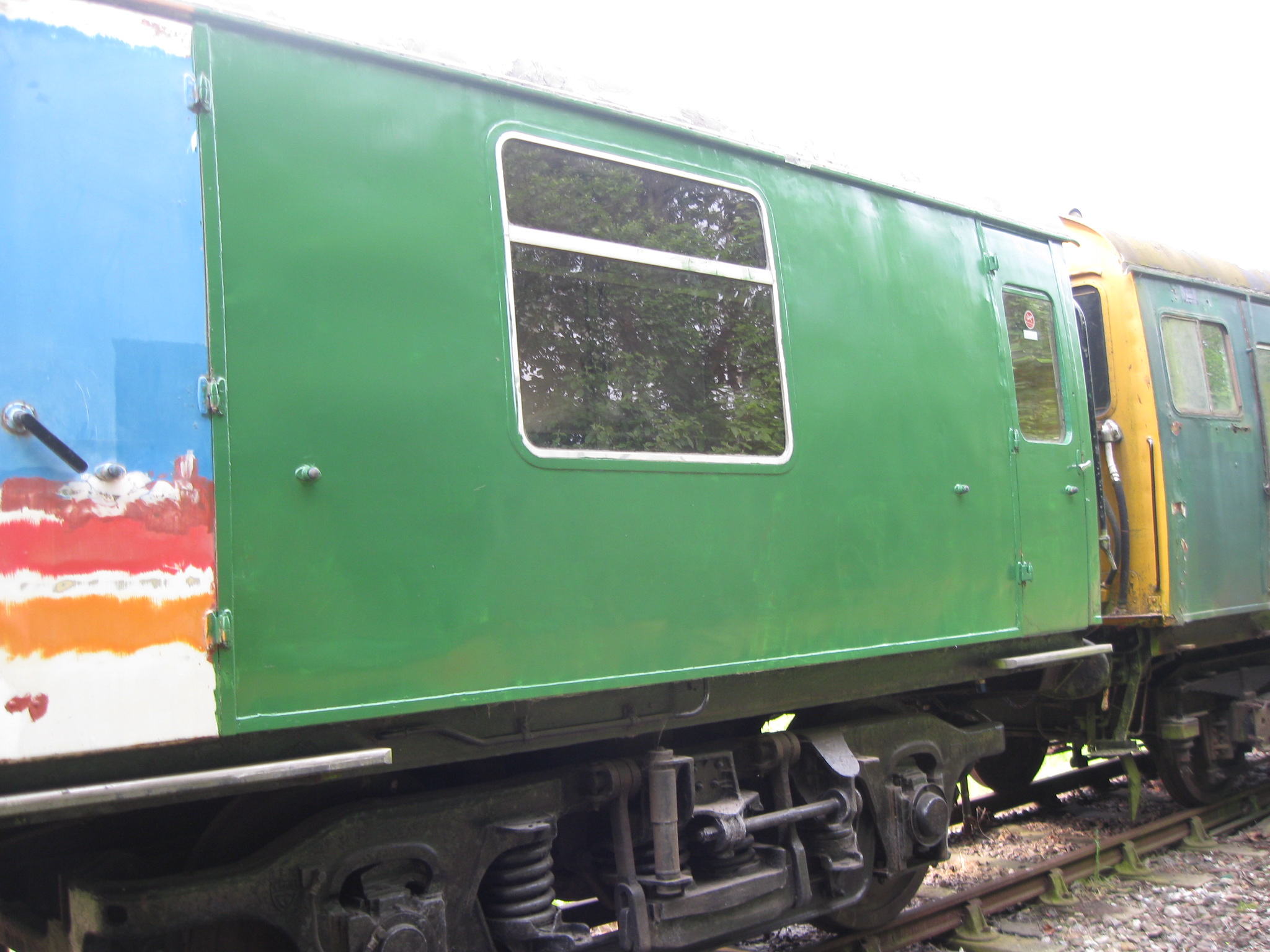 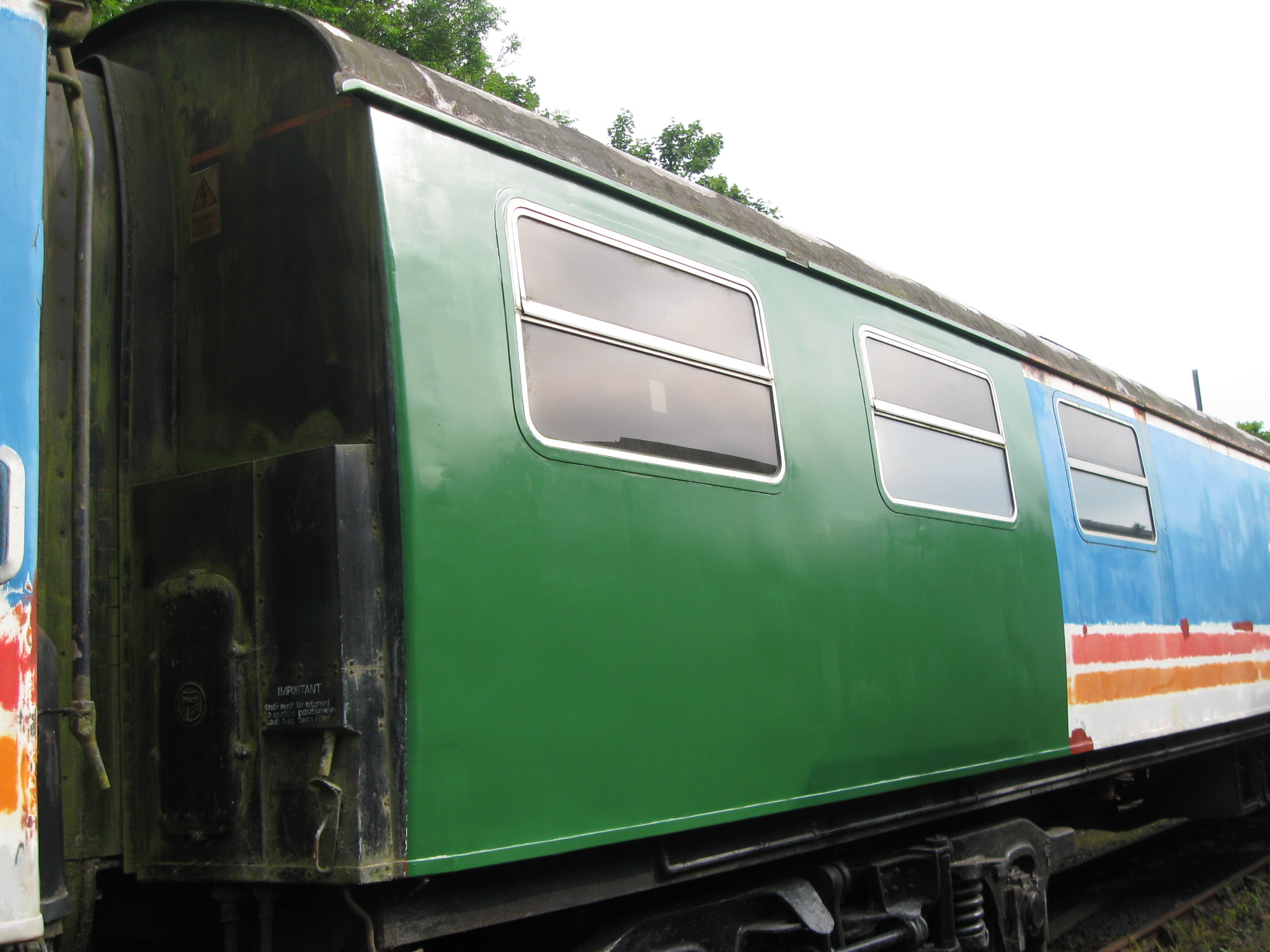 December 2015--Work continues at Southall to restore 68002. This includes a total rebuild of the cab interiors and finishing the exterior repaint, including the orange line and correct length end jumper cables.

MLV 68002  attended an open day on August 29th 2015, at Ramsgate EMU Depot. These pictures show some of the work that has been carried out to restore the unit for this event. This includes new metalwork and pillars around the cab areas, roof and body repaint, new resistor grids and pipework, rebuilt doors and cab side windows. Our restoration team have worked long hours to achieve this.

Work carries on at Southall, Eastleigh and Shepherdswell. At Southall 68002 has passed an Ultrasonic Axle Test (UAT) and the number 2 cab sides and ends are being rebuilt. The cab sliding windows are being redesigned to prevent water ingress.

At Shepherdswell 5759 continues to receive attention and 68008's repaint continues.

Work continues at Southall on MLV 68002. Repairs to the cabsides and some British Rail era side swipe damage have been carried out. A large luggage door has been completely rebuilt with over 80% new materials, including a new wooden door frame and metal sheeting for the lower half of the door.

Before (right) and after (left) repairs to a side swipe that happened in BR days.

Cab side welding repairs and the new luggage door.

The interior of the cab area of Cep motor coach 61229

after removal of bulkhead and flooring ready for the

re-instated brake van area. The cab will have an EPB style controller and brake handle fitted, amongst other changes.

Motor Luggage Van 68008/098 is being prepared for use at Emudays 2014. This includes a complete repaint of one side and much work to repair bodyside and doors. See the seperate Emudays website for further details of the premier event for Southern EMUs.

June 2014 Report.
MLV 68002  is having some lower bodyside and cab end panels replaced, taking advantage of the covered facilities at Southall. 2EPB 5759 is in regular use at the East Kent Railway, see home page for details. 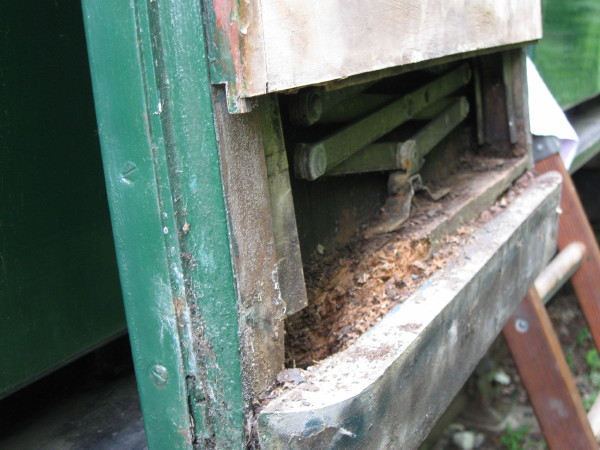 The motor coaches of Cep 7105 have been moved inside Eastleigh works so the rebuild can begin, a picture has been posted on the "latest news" page. The doors of 5759 are still being sorted out, the picture here shows what damage water can do. The metal drainage channel has rusted away completely on this door. The metal door skin gave little clue of what was happening inside. MLV 68001 has a new ceiling in the guards compartment, after rewiring work. 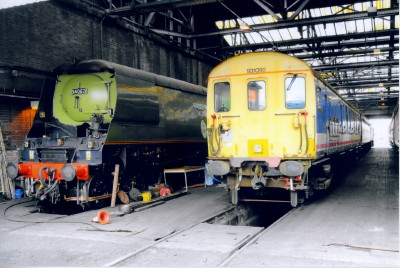 Motor Luggage Van 68002 has moved by road to Southall where facilities are available for work to be carried out. The unit was moved on Thursday 3rd April 2014. Meanwhile phase 2 MLV 68008 is receiving a repaint into green and 5759 is being prepared for service as the operating season has started at the East Kent Railway.

A couple of pictures taken of emus at Eastleigh Works on February 22nd 2014. Our 2 Cep motor coaches are in good company with another refugee of the Kent Coast Electrifications, a former HAP motor coach, converted to a Gatwick Luggage Van and now rebuilt for further use by Network Rail. 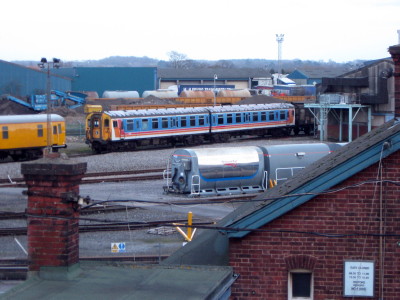 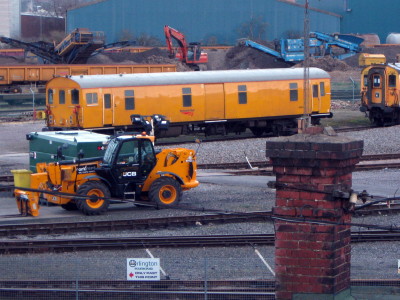 August 2013 Preservation Report
Big news is the completion of a repaint of the last surviving Bep buffet car. The picture tell the story! 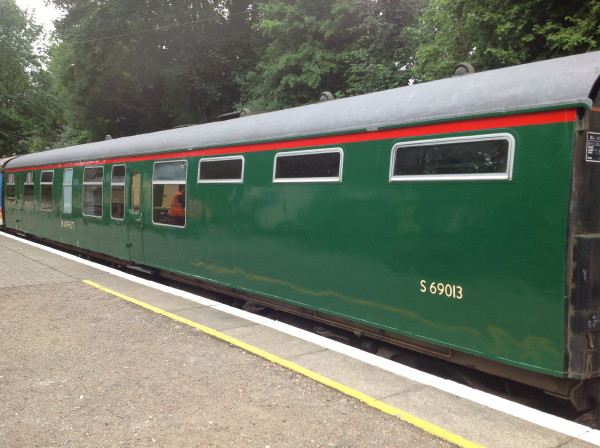 Work has taken place to MLV 68008 to make it weatherproof and give it a repaint. Also the battery covers have been repaired and refurbished. Work still continues on EPB 5759. See all our stock at the emudays 2013.

April 2013 Preservation Report
Despite the weather work continues on the brake van doors area. Work has also restarted on the compartments, with new wood ordered for the floors. The old floor has been removed and all metal surfaces cleaned, primed and painted. the lower 4 inches of the door pillars  have been replaced with new steel (this is an area that always suffers from corrosion). At the same time the brake cylinder cover is being refurbished.  On the motor coach  panels and doors are receiving a  coat of emu green paint, after  being sanded and filled.  Work has also restarted on  roof cleaning, prior to painting. New volunteers always welcome! 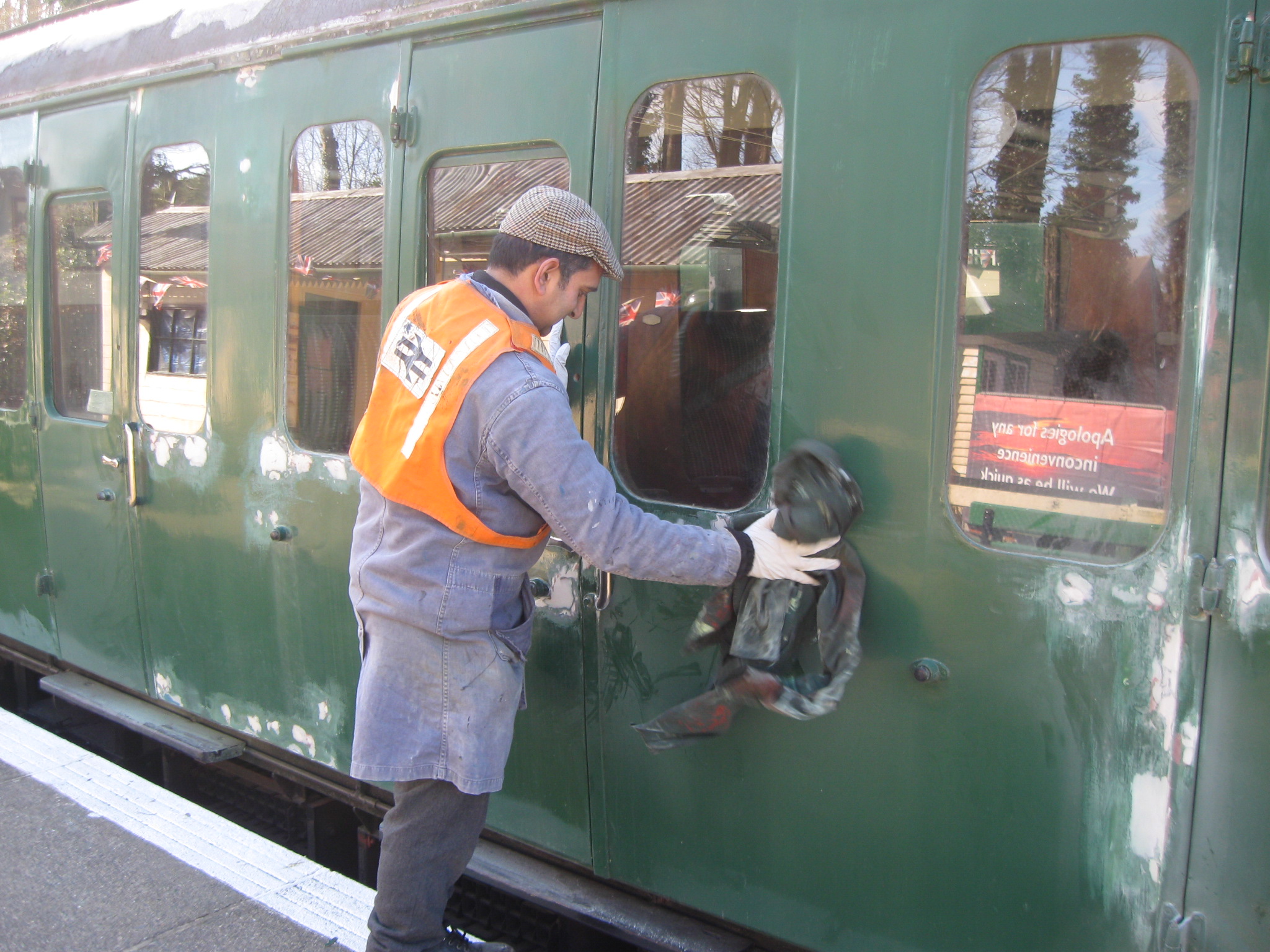 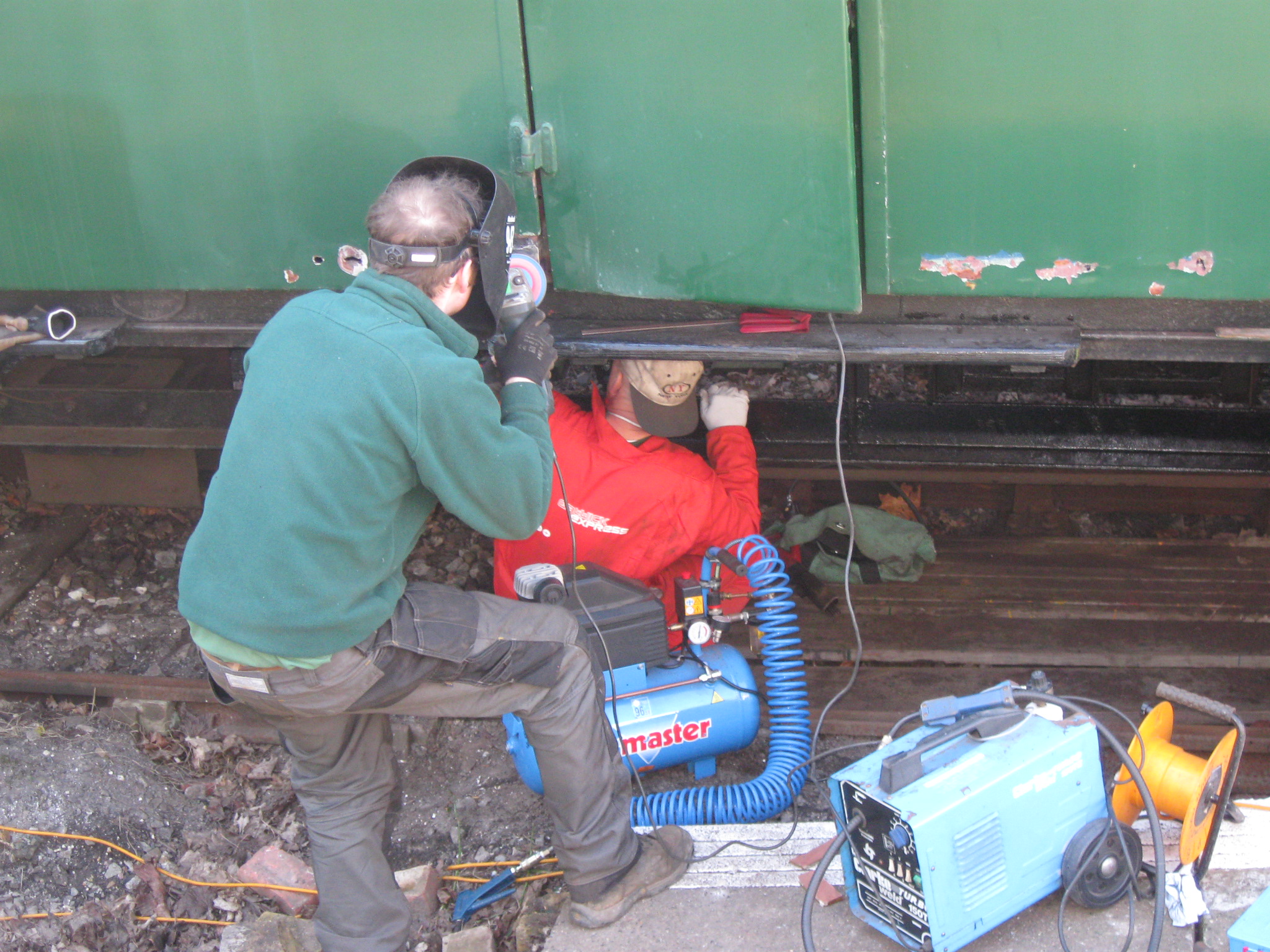 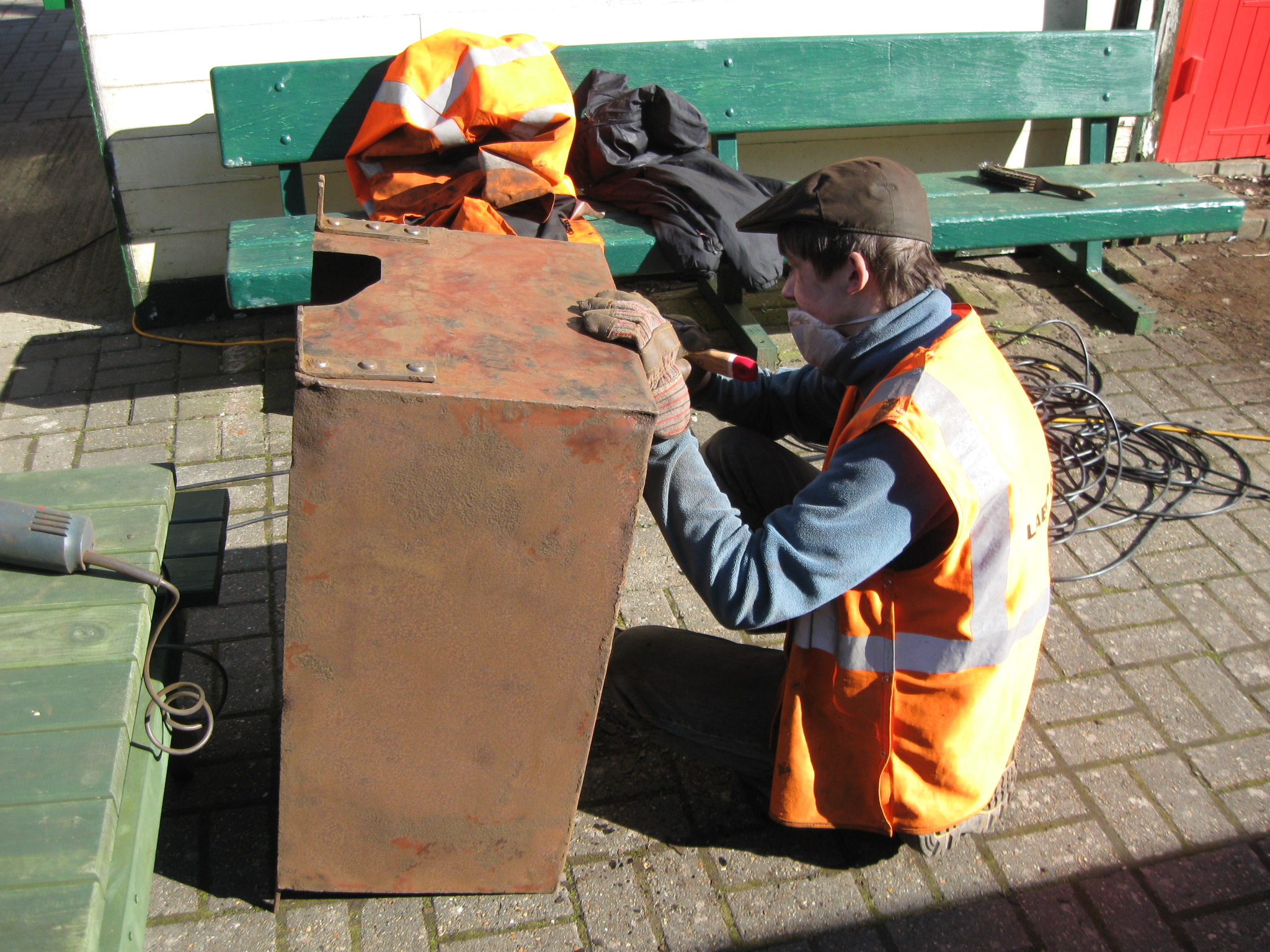 February 2013 preservation report
The usual winter tasks include interior cleaning and, on days when the weather is warmer, painting of bogies and solebars with "underframe black", a thick paint that does what it says on the tin!
Other work includes making up door seals for the non passenger doors on 5759, as part of the Prism grant funded door rebuild.
Work on re-assembling the ceiling on MLV 68001, after it's rewiring, is nearing completion. A plan to modify the ceilings on 5759 has been devised. This will make the ceilings look like the BR Type 4EPBs style. The original ceiling design can not be replicated, as hardboard is unobtainable in the large size sheets required.


Updated 23rd January2018
This website and it's contents are copyright the EPB Preservation Group (Charity no. 1132225)